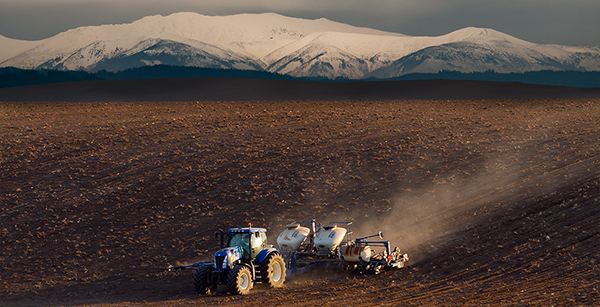 Farming is a global industry with significant activity on every continent other than Antarctica. As we have traveled the world and met farmers in many different countries, we have learned that there are many similarities in how we all go about producing crops to contribute to feeding our growing populations.

Kinze has sold planters all over the world since the early 1980’s, with the majority of international planter sales in Eastern Europe and Russia. Despite many commonalities, there are noticeable differences to how we farm here in the US. In Europe and Russia, for example, there are variances in:

Ukraine and Russia have many large corporate farms (agro-holdings). Land is measured in hectares, with 1 hectare equaling approximately 2.5 acres. It is not uncommon for a single agro-holding company to manage over 80,000 hectares (200,000 acres) of land; however, there are still many family farms throughout Europe. For example, in Poland, family farms are typically less than 40 hectares (100 acres). In comparison, the average farm size in the United States in 2012 was 434 acres, according to the 2012 Census of Agriculture.

There is a significant gap in corn yield between the United States and Europe. According to the USDA, corn yield average in 2015 was approximately 70% higher in the United States compared to Europe, Ukraine, and Russia. This is due to several factors, such as different and fewer corn hybrid choices, lower quality fertilizer, fertilizer practices, potentially poor quality and condition of farm equipment.

Farming is migrating towards adopting Western farming practices. This is especially true in the large agro-holdings which are becoming quite modernized, to include farm information management and planning. This is done through data collection and field mapping, improved crop rotation practices, improved soil health through soil sampling/testing, improved fertilizer quality, prescription fertilizing and seeding, and precision metering and planter automation.

Due to the desire to adopt Western farming practices, Kinze has a great opportunity for growth in this area. In May of 2013, Kinze opened our first manufacturing facility abroad in Lithuania to accommodate the growing market in Eastern Europe and Russia. Local production allows us to get our products, parts and services to our customers quickly and efficiently.