Jon became interested in tractors at a very young age. His dad had one Farmall tractor and his uncles had a few more; one B Farmall, three H Farmalls, and three M Farmalls (two were the latest 1954 MTA Farmalls and one was the Farmall 560).

Jon purchased his first two tractors in 1979 at an auction; a B Farmall and a C Farmall. He restored both of these tractors. Later on, he bought a Cub Farmall and an H Farmall, but didn’t really see it becoming a “collection;” it was just a hobby that he enjoyed. Jon found tractors at auctions, estate sales and by word of mouth. Eventually, as the collection grew and more people heard about it, they began contacting him to buy their antique tractors. He still gets calls, letters and pictures of tractors all the time.

Adding to The Collection

Jon has at least one of every Farmall H and M built from 1939 to 1954. “After I started getting more and more tractors, I realized I had many different year models of the H and M, so when I went to a sale, I would look at the year to see if it was one that I needed,” explained Jon.

In total, Jon has over 200 Farmalls in his collection. Jon can point out the running changes that were made from year to year and in some cases, changes made in the same year. The Farmall serial numbers almost always started at 501 for each model series. For instance the H Farmall went from 501 through 391,730. Jon has a 1939 H Farmall with the serial number 504, the earliest known to exist, and then has serial number 391,728, a 1953 H, that is the highest serial number found, leaving only two more H’s yet to be found. “Who knows where they are. I’m really curious to see where those last two ended up, but I may never know,” stated Jon. 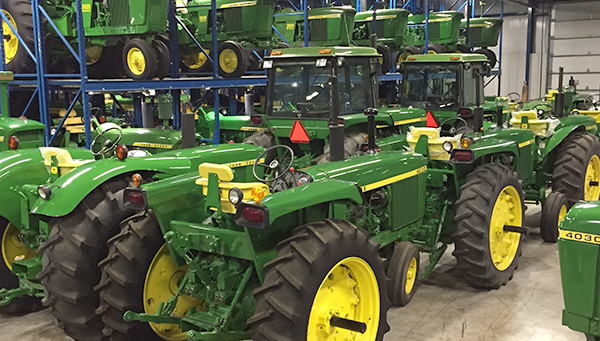 Jon also has some Case, Allis Chalmers, Minneapolis-Moline, Rock Island, Oliver, McCormick Deering tractors and two 1939 9N Fords, one is a cutaway showing all of the internal working parts, engine, transmission and rear end, etc. It makes them a unique pair because 1939 is the first year that Henry Ford made the, now famous, N series tractors 2N, 8N and 9N.

“If I know the history of a tractor and find it interesting, I sometimes put a plaque on it, stating the year and any other information such as the serial number, original owner (if known), etc,” said Jon. 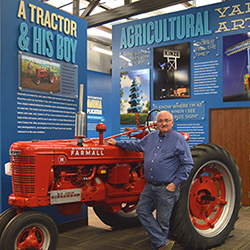 The Classic Tractor Tour of Jon’s collection, offering multiple tours in June and November (most years), began by word of mouth. Jon started by taking small groups through. Then dealers began bringing busloads of farmers and their customers. Bob Caloud, who has helped restore tractors for Jon the last 15 years, was president of the IH Collector Club (both Iowa and then National) and brought his tractor club for a tour many times. Eventually more tractor clubs heard about it and started bringing busloads, too.

It wouldn’t be a true, “Jon” tour if there weren’t tricks or practical jokes planted throughout his collection. Jon is very clever and likes to keep his guests on their toes. He begins each tour asking how many want to see green tractors. Some hands go up. “Well, you might as well get back to the bus,” jokes Jon. He can sense the disappointment of some of his guests. He then asks how many want to see red tractors and even more hands go up. After the first building, they get to the green tractors, so those who were previously disappointed are then excited.

As Jon has said before, “Every tractor has its own story.” That said, be sure to look for more stories to come from Jon’s Antique Tractor Collection.