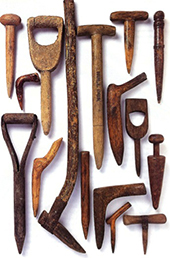 When you consider that today’s corn planters can routinely plant 500 acres a day, it’s hard to imagine that only 200 years ago a farmer did really well to plant only ONE acre of corn in a long day. Typically this was accomplished by one person walking along and making holes with a hoe, or “dibble stick,” followed by another farmer who dropped two, three, or four seeds in the hole before covering it and tamping with soil.

Given the labor intensive nature of planting, farmers quickly developed ways to mechanize the process and make it more efficient. Whereas the planting of corn using “dibble sticks” was practiced for centuries, the invention of hand-actuated planters, horse-drawn drill-planters, and check-row planters all took place in a span of only 60 years once the Industrial Revolution hit the American shore.

The first recorded patent related to a check-row planter was filed in 1857, and by 1900 planters using check wires were widely in use. The 1903 US Department of Agriculture Yearbook noted that, “Perhaps more corn is now planted by means of a check-rower than any other device.” Even as late as 1952, the International Harvester Company still produced the McCormick No. 240, 2-row check-row planter.

The major advantage of the check-row system was that corn fields could be laid out in a “checker board” fashion where 2 to 4 seeds were planted at each intersection. This allowed cultivating from multiple directions to provide effective weed control before the introduction of herbicides. However, a disadvantage was that planting using a check wire was a still very labor intensive process. On a typical 80-rod field (1/4 mile rows), approximately 35 percent of the farmer’s time was consumed laying out, moving, and picking up the wire that was stretched from one end of the field to the other.

While in development since the 1990s, hydraulic meter drives did not come into popularity until approximately 2005. With the development of GPS for agricultural applications and increased precision farming practices, hydraulic meter drives are now providing the necessary variable population rate control that is used by prescription mapping. When combined with row unit clutches, seed savings and increased yields are further realized by decreased over-planting when planting into angular headlands and in irregularly shaped fields. Kinze has offered the hydraulic meter drive for many years and has it available for the 4900, 3700, 3660, and 3600 model planters.

In 2013 Kinze introduced the model 4900 planter equipped with individual row electric meter drives. The electric drives on this innovative planter allow control of each row as if they were individual planters. Seed populations are fully adjustable as set up on a prescription map to minimize seed costs and maximize yields. When going through waterways and entering headlands, each row unit can be turned on and off as needed to stop the flow of seed. In addition, the electric meter drive provides a capability that no other drive can — curve compensation. When planting on curves with shaft driven meters, the inside rows have seed spacing that is too close, while the outside rows have seeds that are too far apart. With curve compensation, every row across the width of the planter has the same seed spacing for maximum yields. 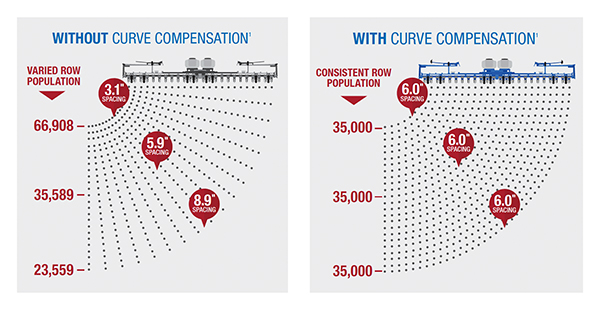 Clearly, metering seeds has changed dramatically through the years. Today’s planters can be equipped with anything from a simple ground contact drive to a state-of-the-art electric drive that is completely controlled by GPS and field data. Whichever meter drive is best for your operation, Kinze has the right solution. For more information on the Kinze lineup of planters and meter drives, contact your local Kinze dealer.