The following is the first installment of a five-part series describing Jon Kinzenbaw’s early battles with John Deere - both in the field and in the courtroom. What started out as suit over row unit availability, eventually ended in a ruling that forever changed Kinzenbaw’s young company - and the ag equipment industry as a whole!

This excerpt is from the book "Fifty Years of Disruptive Innovation" and is told in Jon’s own words.

The Meeting of Two Fools

In 1975, a farmer from southern Iowa stopped by my shop and commented that somebody should figure out how to fold a big planter horizontally to make it easy to move from field to field. At that time, 12-row planters were being introduced, but they folded upward, which resulted in seed and insecticide being spilled from their hoppers. Folding vertically simply wasn’t a good way to transport a planter, and planters larger than 12 rows were too tall and too wide to safely go down the road. Another method competitors used to move planters from field to field was the Donahue Trailer. However, this was extremely time consuming and required farmers unhook from the planter, load the planter on a trailer, hook up to the trailer and then pull it down the road to the next farm. Once there, the process had to be reversed to resume planting. By the time the field was planted, inevitably the trailer would be in the way of the last pass. So the farmer would unhook from the planter, hook to the trailer and move it out of the way to finish planting, and then repeat the process of loading the planter back onto the trailer to transport it down the road.

The planter is the most important piece of equipment a farmer owns and it is critical to his livelihood. If the crop isn’t planted within the narrow springtime window of favorable weather conditions, the farmer will not have a crop and therefore won’t make any money. If a combine breaks down, the corn will remain standing until it can be harvested with another combine rented or borrowed. If a planter breaks down, the farmer cannot easily rent or borrow another one because every farmer typically configures their planter specifically for their operation.

So even though I had no buyer, I took it upon myself to build the first folding planter. By the fall of 1975, I had tested the first version of a folding 16-row planter. However, it was a semi-mounted version but I wanted it to be a pull-type planter, so I redesigned it during the winter of 1976. This was the design we used after 1976 to build hundreds of rear-fold planters in eight-row, 12-row, 16-row, and 24-row versions. There was clearly a need for a planter that a farmer could fold mechanically from the tractor seat, would be narrow enough to drive down the road to the next farm and then mechanically unfold to planting position. Folding and transporting a planter this way took very little time and labor. 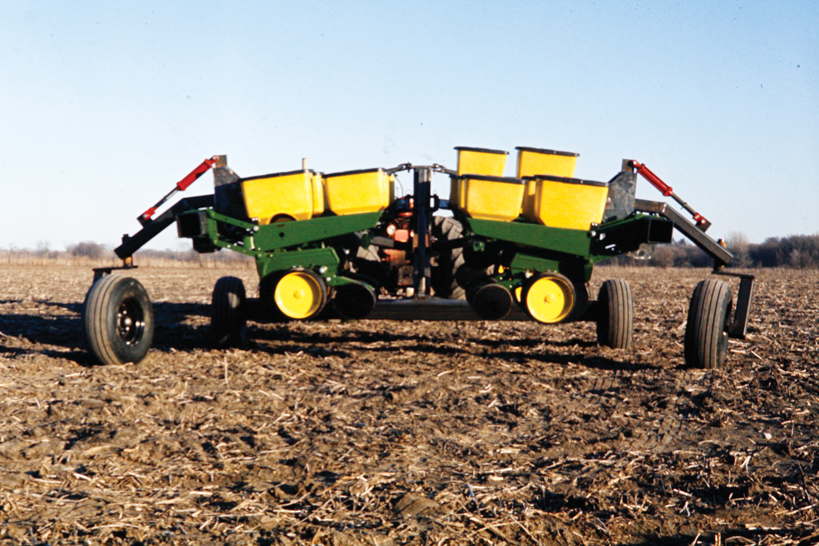 The first planters were designed to accept International Harvester, Allis-Chalmers, and John Deere row units. All these companies priced their row units individually for sale through their dealers. After a couple of years, however, 96 percent of the rear-fold planters were being built with the new John Deere Max Emerge™ row units. The Max Emerge™ row unit had several features that were highly desirable: A double disc opener, gauge wheels with depth control, canted closing wheels and the finger pickup meter. So we started buying the Deere row units by the dozens, and John Deere was happy to sell them to us. In the late 1960s and early 1970s it was not uncommon for John Deere management and engineers to stop by my shop in Ladora on their way from Waterloo to Moline. They observed me building Big Blue and watched me manufacture my rear-fold planters. They even encouraged me to paint my planter frame green to match the row units.

We were doing quite well until John Deere offered to pay me a royalty on my folding planter design. They also wanted me to build a prototype planter using their ideas and suggestions. Some of the company managers took me out to lunch at the Veeley Restaurant in Moline and offered me $25 per folding bar. Well, that didn’t sound like much for a planter that was selling for $20,000 to $30,000. So I asked them for $100, but they said they couldn’t pay such an “exorbitant” rate.

So Deere and I agreed to disagree, and I continued building planters with the Deere row units. A short time later, near the spring of 1977, there was a tremendous “shortage” of the row units. The John Deere dealer in Grinnell, Iowa, at that time, was one of the dealers providing me row units. I was having difficulty getting the 25-row units I ordered, so I drove over to Grinnell to see why. I sat down with the owner, Dave, and he pulled a copy of the order out of the file drawer. In the top right hand corner was a hand-written note: “Dave, cancel the order for 25 and do not reorder.” I asked for a copy of the paperwork and Dave was really nervous about giving it to me, so he folded the corner down and copied the invoice without the note. When I got out to my pickup, I rewrote the note in the corner as I had memorized it.

Customers were also trying to order row units, as it did not matter to me if they bought row units from dealers or I bought them. Shortly thereafter, Dean Gigot from Garden City, Kansas, a large cattle and irrigation row crop farmer, came to me and wanted four new 16-row planters. We made a deal, and both he and I tried to purchase row units for his planters. While Dean was in Iowa, he went on to Moline to tour the Deere factory and saw mounted planters sitting in the yard at the factory. A few weeks later, it became evident that we were not going to be able to get enough row units for his four planters. When I called him to discuss the situation, he told me about the completed, mounted planters he had seen in Moline. He said he would simply buy eight, 8-row mounted planters, remove the row units and store the frames in his shop until the shortage passed and then resell the mounted planters.

By this time, it was obvious that Deere was shutting off my supply of row units. My attorney, Jim Hill, told me it was a violation of the Sherman Antitrust Act to tie a patentable row unit (the John Deere row unit had five patents on it) to a non-patentable, non-folding toolbar in order to purchase it. In other words, Deere was forcing customers to buy an undesirable planter tool bar in order to get the highly desired row units. It was becoming obvious that things were not going to improve for the next season, so in the summer of 1977 we filed a lawsuit against Deere in Cedar Rapids, Iowa, based on the antitrust violations and contrived shortages. This was a stern reminder to Deere, and we bandied it through the court system for several months. Deere finally realized it was in trouble, so it agreed to sell me the row units as long as I bought them at full retail prices through its dealerships. That meant I had to pay approximately $1,200 a row, but found I could get a 20 percent discount, which I then turned around and gave half of to the farmer, and used the other half to break even on my overhead costs and loan interest. Amazingly, we were building a folding planter for the same price as the John Deere non-folding, non-flexing 12-row, and that didn’t count the $2,500 the farmer would have had to pay for a trailer to transport the Deere planter. That’s how things went for a year.

I then found a Deere dealer in Roanoke, Illinois, Martin Brothers, which was located near my friend Bill Dietrich’s factory, DMI. For the 1978 season, Dietrich told me to order 1,000 row units from Martin Brothers and that he would co-sign the order since it was such a large number. He called me back shortly thereafter and said, “I think you can sell 2,000 row units, so let’s increase your order to 2,000 and I will co-sign.” That season we also relied on farmers to buy some of the row units. They bought 3,000 for a combined total of 5,000 row units for the season. In the summer of 1978, we ordered 3,000 row units and we hoped customers would be able to order 3,000 additional row units for the spring of 1979. As the spring planting season of 1979 approached, Deere sent me a letter saying it was canceling the last 1,000 row units I had ordered due to a shortage, and added, “By the way, there won’t be any row units for 1980.”

Around that same time, Deere released its own version of a front-folding bar to compete with mine. Deere forced every dealer to take two of its new planters equipped with Max Emerge™ row units. While Deere had about 5,000 row units for its new frames, it had none for us. I had approximately 150 unsold frames, center sections, wings and towers, but was short the last 1,000 row units for that season and was unable to sell them. For the 1980 season we were once again high and dry without row units, and farmers were going to be deprived of competition that would lower the price of planters. 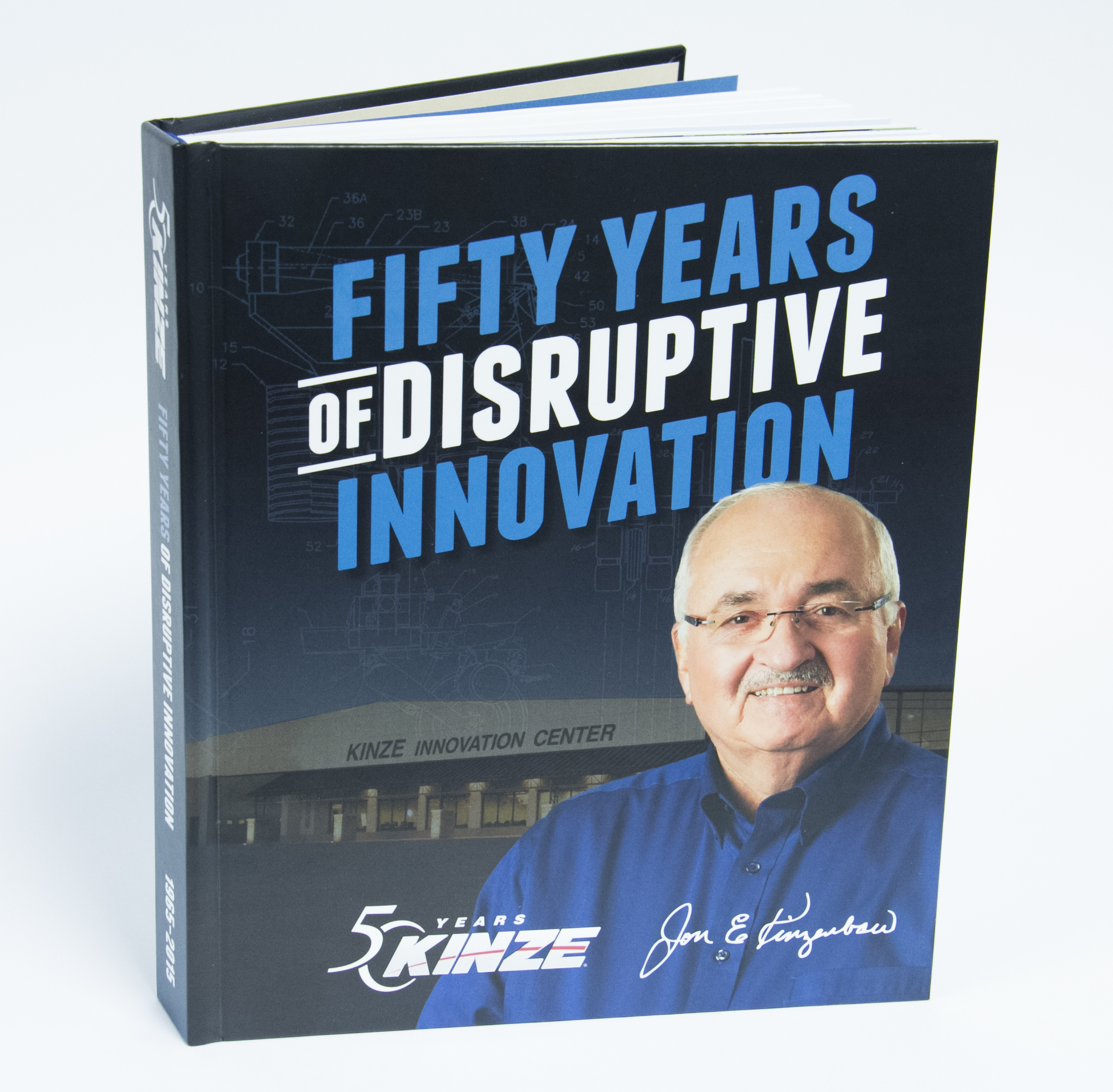