The following is the third installment of a five-part series describing Jon Kinzenbaw’s early battles with John Deere - both in the field and in the courtroom. What started out as suit over row unit availability, eventually ended in a ruling that forever changed Kinzenbaw’s young company - and the ag equipment industry as a whole!

This excerpt is from the book "Fifty Years of Disruptive Innovation" and is told in Jon’s own words. If you missed part one or part two, be sure to catch up on this blog series.

The Battle Lines Are Drawn

It took three years to get our battle into the court system, but in the meantime, we were building thousands of row units and were selling all we could make. I was sourcing the same tires, rims, bearings and sprockets as Deere, and there were no issues with me getting these supplies, further proof that Deere was contriving the shortage of row units. In preparation for the trial, my attorney advised me to create a separate division of the company that built the row units to insulate the rest of the company, so if we lost, we wouldn’t lose everything. When he asked what I wanted to name it, I said, “Kinze Shortage Specialties Division.”

This was a difficult time in my life. My mom passed away in January 1982 from a five-week battle with cancer. Ten months later, my dad passed away, also from cancer. The Deere trial started in March 1983. 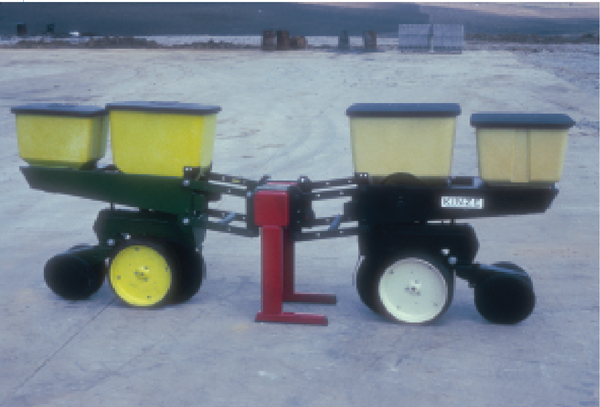 When we finally got into court in the spring of 1983, our judge ordered the two cases to be combined into one trial. He said we would go first with our antitrust case, and then Deere would use the same court and jury to follow up with its patent case. Deere’s attorneys complained to the judge that they couldn’t get a fair trial on their patents if we went forward with our so-called “frivolous” antitrust suit. So the judge reversed the order, creating a two-part trial allowing the counter plaintiff (Deere) to go first.

The trial began and inside the courtroom sat our two row units, nose-to-nose. Deere had five patents on the Max Emerge™ row unit which included: Depth gauge wheels, canted closing wheels, the finger pickup mechanism, an additional meter patent and the clutch engaging the meter from the driveline. The trial stepped through each patent individually, going over the physical components, the claims, and reading each patent from beginning to end. One at a time, we presented our case against the patents and John Deere presented its claims against us for infringing its patents. 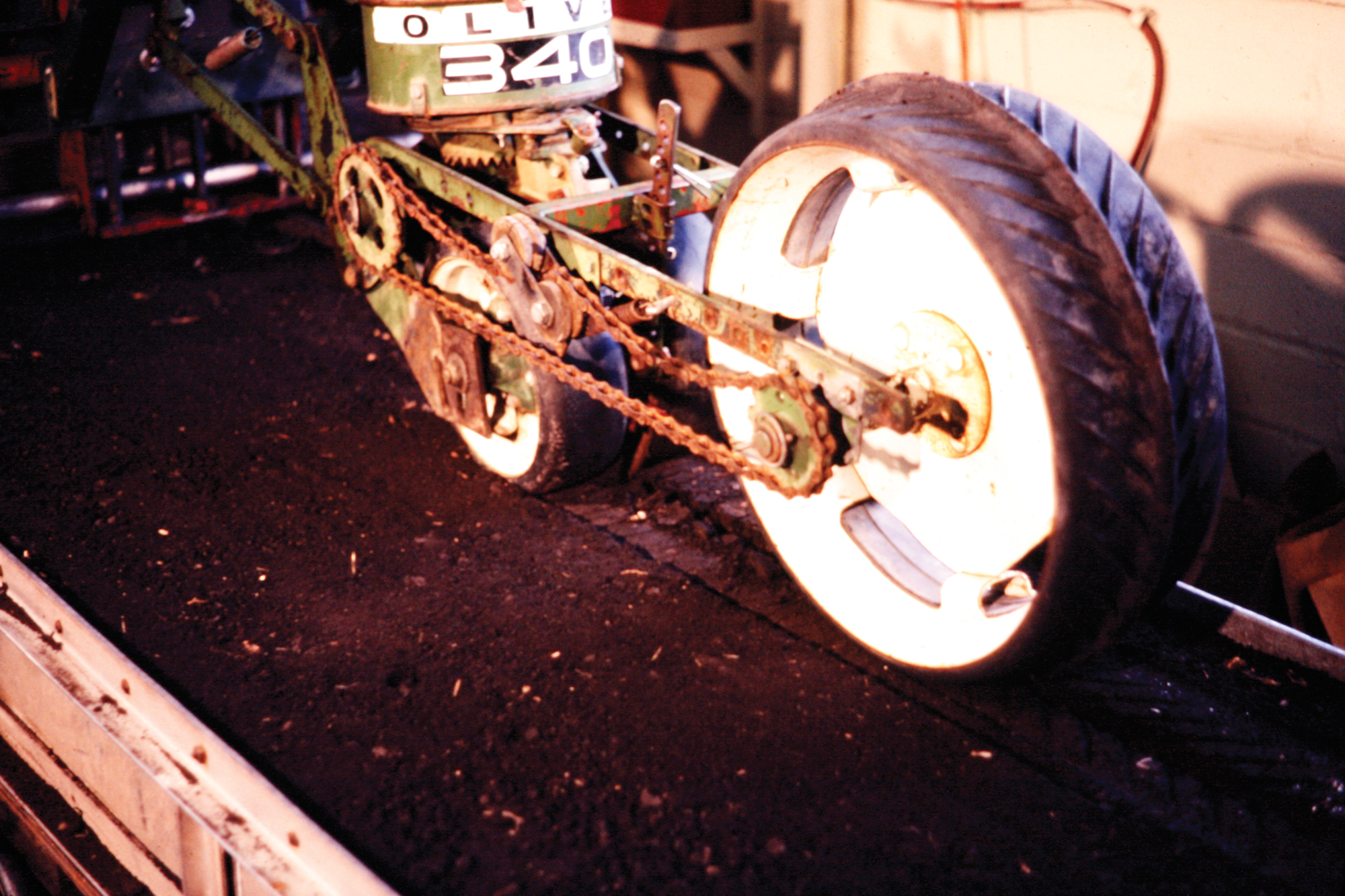 A gentleman named Waldo Pust, from Billings, Montana, had an invention for a gauge wheel where he moved it further to the rear from the center of the blade. That created a wiping action of the soil from the blade. Deere obtained the rights from Pust, for his thought-to-be invention and filed its patents. However, the original gauge wheel was an attachment for an Oliver planter dating back to the early 1950s.

I was made aware of this by one of my employees, Dave Hartz, who had a neighbor with this gauge wheel attachment on an Oliver planter. Hartz’s neighbor still had the operator’s manual for the planter which we gave to Jim Hill. Once Hill was made aware of the gauge wheel attachment, he researched Deere’s patent history documents filed with the U.S. Patent Office. When Deere submitted its claims for this patent to the patent office, it did not mention or show that it was actually an Oliver row unit attachment. Deere led the patent office to believe that it was its experimental row unit because it was green (Oliver was green, too). It was also discovered that Deere cropped off the top half of the picture submitted to the patent office, which would have shown the Oliver decal on the hopper of the row unit.

The patent was invalidated in court due to non-disclosure of the prior Oliver invention. Oliver never patented the gauge wheel, so there was no history of it in the patent office. Even though Oliver didn’t get a patent, it was considered prior art, which invalidated Pust’s patent. Pust’s only contribution was moving the location of the gauge wheel two inches from the original Oliver location. Simply changing distance cannot be patented.

Another issue with the John Deere and Pust patent on the gauge wheels was that it claimed the gauge tire needed to be smaller in diameter than the blade it ran adjacent to. The specific claim stated that the tire needed to be smaller. However, in actual Deere production, the wheel was bigger than the blade, so it wasn’t following the language of its own patent. The Kinze row unit used the same tire and blade, so neither did we infringe based on how the patent language was written. The blade and tire were used as evidence in the courtroom. When we were done showing it, we laid the tire upside down on the floor by the jury box with the blade placed down inside the tire. This was unintentional, but we quickly saw that every time the jurors went in and out, they walked past this blade and tire and could see that the tire was larger. Based on the size of the wheel alone, the jury ruled that we did not infringe that patent.

In 1981, my dad told me that the Hays corn planter (circa 1930) also had large 30-inch canted, or tipped, wheels that pinch the seed trench closed in the same fashion as the Deere canted wheels. This was prior art that existed well before the Deere patent on this claim. Even though the Deere canted wheels were about 50 percent smaller in size, this made no difference. The concept had already been in prior use. The Hays corn planter was not disclosed to the patent office by Deere, and thus, that patent was invalidated by the court based on prior use and non-disclosure.

The seed meter was claimed to be Eugene Keeton’s invention. He was from Kentucky and took the concept to Deere in the late 1960s. Deere bought rights to it on a royalty basis and filed a patent. It gave Keeton 50 cents per row for his invention and it was limited to the first 50,000 rows. But in 1945, the Morrison Thesis was written, describing a finger-type pickup that would pick up seed and deposit it through the hole in the back of a seed plate, just like the Keeton claim. Deere chose to ignore the Morrison Thesis, claiming it didn’t know about it.

In reality, the patent file history showed Deere did, in fact, present the Morrison Thesis in the documents presented to the patent office, but did not use candor in explaining to the examiner that it was written some 20 years prior. A patent examiner doesn’t have time to research all documents, so they assume and rely on candid, honest disclosure. During the trial, we put the language of the Deere Keeton patent on the overhead that read, “Fingers like the hands of a clock, rotating vertically on a round plate and depositing the seeds through a window in the back of the plate to be dropped in the ground.” The Morrison Thesis was then placed on the overhead beside it and the language was exactly the same. The court ruled this patent was invalid and fraudulently obtained, a willful and deliberate violation of patent law. In a trial, triple damages can be applied to actions that are willful and not merely an “oversight.”

Another Deere patent claim was for the mechanical clutch device that disengaged the drive shaft from the meter. This allowed the meter to be disengaged from planting seed, and also allowed for the easy removal of the meter from the drive shaft. Deere filed and received a patent, but again failed to disclose the prior art. This was an old idea that had been used on a planting mechanism equipped on a horse-drawn cultivator during the 1930s. The seed mechanism was engaged and disengaged while cultivating, so that seed would be dropped where a plant was missing in the row. Another Deere patent was declared invalid by the court. 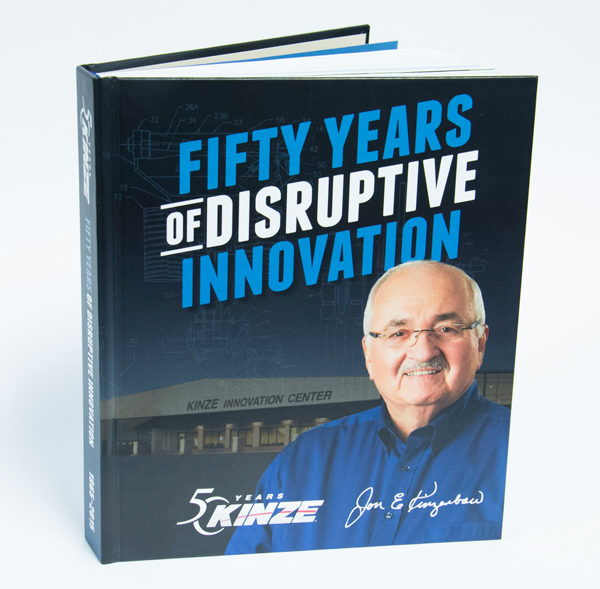 The first in a five-part series describing Jon Kinzenbaw's early battles against John Deere, both in the field and in the courtroom.